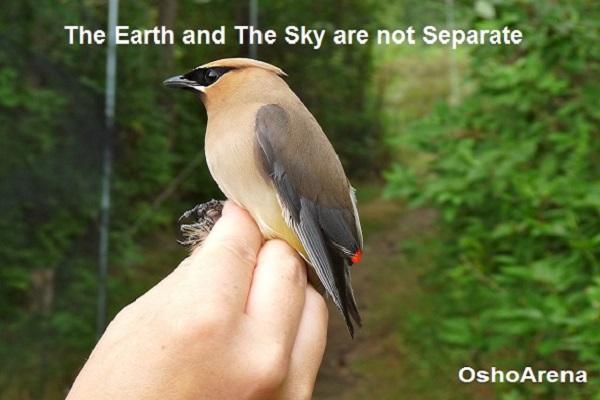 One day a monk came with a very puzzled look. He said, ”I am in a strange difficulty. A bird flying dropped a piece of meat into my begging bowl. I was coming back from begging in the city, to settle under some tree” – in the garden where they were staying – ”to eat my food. Now the problem is, if I throw out this piece of meat I am going against your teaching that, ‘Everything has to be eaten that falls into your begging bowl.’ And if I eat it, I am still going against your teaching of, ‘Always be vegetarian.’ Now what am I supposed to do?”

The whole assembly of monks also were in a strange position: how is Buddha going to solve it?

Buddha thought, ”If I say ‘throw it’, that will become a universal thing. People will start choosing: whatever is good, delicious they will eat and the remaining they will throw out. The country supports the monks. This will be against the people who are supporting you. With great hardship they earn, and you throw away their food. So I cannot say to throw it out.

”And as far as birds are concerned, it is very unlikely that again, in the centuries following, any bird will repeat this. So there is no danger, if only one person eats on one day a small piece of meat.”

He said, ”Eat everything that has fallen into your begging bowl.”

And this became for the cunning mind of man a loophole, that, ”Buddha is not against meat; just you have not to kill, he is against killing. If meat is given to you, offered to you, you have to respectfully receive it.”

So now in China and Japan, all the Buddhists are non-vegetarian. Not a single Buddhist is vegetarian. And in every food shop, restaurant they make it clear that here non-vegetarian food is available which has not been especially killed – it is from animals dying on their own.

Now, so many animals don’t die on their own. And in fact, few animals do; you will never find how they die. Have you seen a cow or a crow dying, dead? Once in a while perhaps because of electric wires… otherwise before dying, somehow they disappear. They disappear deep in forests, they disappear into mountains, to find a peaceful grave.

Reference: Nansen The Point of Departure

The Earth and The Sky are not Separate

Go Deep Into The Forest