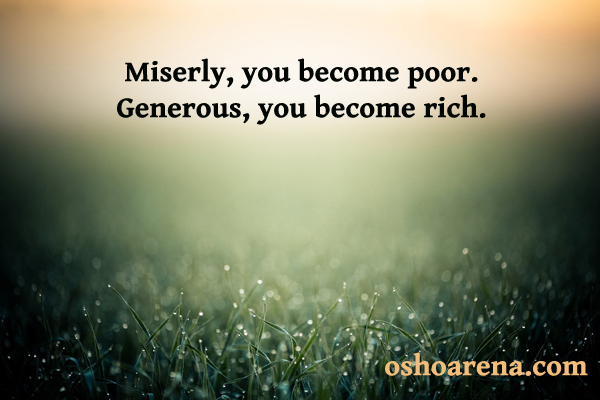 Generosity is the real richness.

That is the meaning when Jesus says: ‘Drink me! Eat me!’ The more you eat him, the more Jesus grows. The more you drink him, the more fresh waters are flowing in. The riches that life has endowed you with are not limited. But only a generous man can know about it. They are unlimited. You are not a company with limited sources – you are a company with unlimited sources. Behind you is hidden the Divine. Nobody can exhaust it. Sing as many songs as you can: you will not be exhausted; rather, on the contrary, better and better songs will be coming in.

It is said of one of the greatest poets of India, Rabindranath Tagore, that when he was dying, a friend came to him, a literary friend, a great critic. And he said, ‘You can die in deep contentment, because you have sung so many songs. Nobody ever before has sung so many.’ Rabindranath has written six thousand songs. The great English poet, Shelley, has written only two thousand. Rabindranath has written six thousand poems. And every poem is a marvel in itself, a beautiful diamond, unique. The friend was right. He said, ‘You can die with deep contentment, fulfilled. You have sung so many songs. Not even a Kalidas, not even a Shelley, can compete with you.’ And when he was saying this, tears were flowing in Rabindranath’s eyes. He couldn’t believe it. He said, ‘You – and crying! Are you afraid of death? I could never believe that a man who has been singing his whole life that death is the great friend – afraid of death?’

Rabindranath said, ‘No, not afraid of death. Death is beautiful, as beautiful as life. I am weeping and crying because better and better songs were coming lately. Up to now I was just a child. Now a maturity was happening, and God was giving me more and more. The more I sang, the more was flowing out of me. In fact, now the veena was ready and the time has come to leave. This is unjust. Now I was feeling ready to really sing!’

But I tell you: even if Rabindranath had lived one thousand years, the same would have been the case – because it is everflowing. You share and you know it is ever-flowing. You sing and you know it is ever-coming. There is no end to it. Even after a thousand years, Rabindranath would have died with tears in the eyes, because more was flowing. Nobody can exhaust it. God is inexhaustible. And you have God within you. Why are you so miserly?

And generous you can become right now, as you are, because there is nothing else to it. You have simply to understand – and become! Nothing is lacking. All that you need to be generous is already the case.