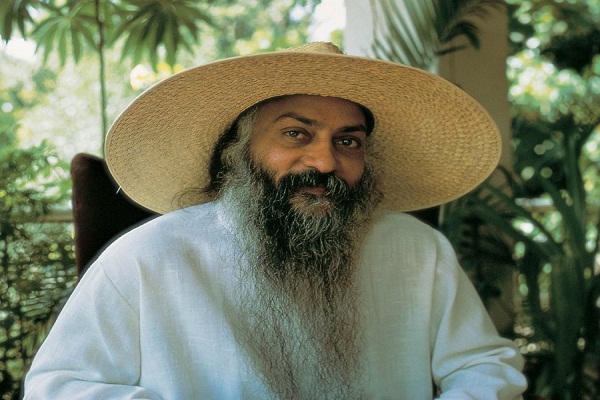 WHEN HEARING THE STORY OVER DINNER OF DADU AND TWO OF HIS DISCIPLES, RAJJAB AND SUNDERO. I WAS BAFFLED BY HOW DEEPLY AFFECTED THEY BOTH WERE BY THE DEATH OF THEIR MASTER. ONE, RAJJAB, NEVER OPENED HIS EYES AGAIN, AND THE OTHER, SUNDERO, DIED IN THE SAME BED AS HIS MASTER, DADU. HOW CAN AN ENLIGHTENED PERSON BE SO AFFECTED BY THE DEATH OF HIS MASTER OR BELOVED ONE?

IT IS ONE OF THE MOST BEAUTIFUL STORIES. There is no parallel to it in the whole history of religion, but it has to be understood. You have misunderstood it totally; it is very easy to misunderstand it. Apparently, what you have understood is what is understood by people who read the story.

The question arises: why are two enlightened persons so much affected by the death of their Master? They are not affected at all! It is not happening out of misery; it is a totally different dimension.

Rajjab never opened his eyes again. He was asked once why he had closed his eyes. He said, “Because I have seen the most beautiful thing in the world — now there is nothing else to see!”

Dadu was the most beautiful flower. Now what is the point of keeping your eyes open? for what? If you have the Kohinoor with you, you will not go on collecting pebbles on the seashore — or will you? Rajjab is not affected. It is not out of sadness that he closes his eyes; there is not a single tear in his eyes. He is not weeping, he is not crying. With closed eyes he continued to dance and sing the songs of Dadu. But he said, “Once you have seen God in human form, then there is nothing else worth seeing. I would like the impact of my Master on my eyes to be the last and the most penetrating. I would not like it to be covered by dust.”

Ambubhai, then the whole story takes a totally different turn. It is tremendous love. It is not an attachment to the Master’s body, it is great understanding.

Once you have seen a Master…and Rajjab lived very very close to Dadu. The day he became an initiate he was very small, just seven years old. He had come with his parents to participate in a religious festival; he was not even aware of Dadu. Dadu was also there at the festival. The parents had gone to pay their formal respects, because it was known in the country that Dadu was enlightened. They didn’t believe, but this country is very traditional and formal: if people hear that somebody is enlightened, whether they believe or not they at least go and touch his feet. Maybe he is, then why miss the opportunity? If he is not, you are not losing anything by touching his feet. This is cunningness, businesslike!

The parents had gone; Rajjab followed the parents. The parents touched his feet, but Rajjab was transformed. The moment he saw Dadu he recognized something from his past lives. This man was not new, this quality was not new. He had known him before. That almost always happens if you have lived with a Master before — immediately a recognition!

He fell at his feet. The parents tried to persuade him to come back with them. He said, “I have found my real parents. Now you can go.” He touched the feet of his parents and said, “Just as you have touched the feet of Dadu formally, I touch your feet and say goodbye.” A seven-year-old child! Must have had a maturity of many lives behind him. The parents cried and wept, but Rajjab said, “It is impossible! I have found the man — I cannot leave him even for a single moment!”

And from that time, for twenty years, he was in the service of the Master; looking after his needs, sleeping in the same room, continuously on guard for what he needed. And the day Dadu died Rajjab simply closed his eyes. It was closing eyes to the world. He was saying, Now there is nothing more to see. I have seen that which is really worth seeing. Now why waste your eyes and why collect dust? Once you have mirrored God then there is nothing else — you have seen the ultimate.”

It was not out of attachment, Ambubhai, that Rajjab closed his eyes; it was out of great understanding. And he was not unhappy. He danced, he sang songs, as long as he lived — but with closed eyes, so that he could still see the Master inside. Twenty years’ continuous communion with the Master…the Master had almost become a part of his soul! By closing his eyes he was still keeping company with the Master. Don’t misunderstand him.

Rajjab is one of the most beautiful disciples ever.

And what happened to Sundero, another disciple? When Dadu died he laid himself down on the same bed and remained on the same bed; he never left the bed again. The Master had slept on it his whole life: it was full of his vibe, it was full of his presence, it was soaked with him. He would not leave the bed. “Why?” people would ask him. And Sundero would say, “There is nowhere to go. I have arrived — this is my home. This is my MOKSHA, this is my heaven. And I would like to LIVE in this beautiful space that the Master has created in this bed, and I would like to die here.” It is becoming so attuned with the Master that you don’t feel your life and your death as separate from him; that is the meaning of it.

Sundero was so attuned with the Master’s life that it used to happen sometimes that he would speak in Dadu’s name. And he was told by people, “You are not Dadu!” Then he would say, “Yes, forgive me. I forget! But if you ask in reality, then I am Dadu – – I have become one with my Master.”

That is the ultimate state of disciplehood: when the disciple becomes one with the Master. He used to say that he was Dadu. He has written songs in which his name is not given but Dadu’s name — and people think that is not good. And the scholars go on discarding all that has been written by Sundero; they think that is not from Dadu. But I say to you: it IS from Dadu! Sundero has become just a hollow bamboo on the lips of Dadu. Sundero exists no more as a separate entity. That is the ultimate goal of a disciple: when the disciple and Master meet and merge and become one. Sundero has become one with the Master, hence he has every right to sign ‘Dadu’. He signs his poems as Dadu, not as Sundero — and I TOTALLY agree with him! And I would like the scholars to be a little more sensitive.

And they would say, “But we have not come to invite you, we have come to invite Dadu!” Sundero would say, “But who am I? Why give trouble to the old man? I can come — I am his younger form. I can travel long distances more easily — why create trouble for him?” And Dadu sometimes used to send Sundero. People would invite Dadu and he would send Sundero. And people were very much puzzled: “We have invited the Master, not the disciple.” But they were not able to understand that the Master and the disciple, at the ultimate peak of their love affair, disappear into each other.

Hence, the day Dadu died, Sundero did not say a single word about his death, did not go to the funeral at all. Everybody left for the funeral. Thousands of disciples had gathered, and they were crying and weeping and they were in great misery. And what did Sundero do? He entered into the bed of the Master, covered himself with his blanket — became Dadu. When people came back they thought, “This is sacrilegious!” They told Sundero,

“This is not right — you are going mad! Have you gone crazy or something? This is the Master’s bed — you get out!”

He said, “But I am no more. Sundero has died. Have you not gone to his funeral? You have gone, you have burnt him! I am Dadu. Now Dadu will function through me.” That’s why, Ambujibhai, he never left the bed, not even for a single moment. He lived on the bed, he died on the same bed — because he had become the Master.

I call this game the mad game! By ‘mad’ I mean: M represents Master and D represents disciple — ‘Master-And-Disciple Game’ — it is a MAD game! Unless you also become mad you will not understand it.

And Ambujibhai, I am happy to see that some madness is entering into you. You are on the way. You will not be out of this Buddhafield for long. I can see you approaching closer and closer. Sooner or later the color orange is going to be your color too — and I hope that before you leave the body this happens. Become Rajjab, become Sundero! Don’t think about them — these people are not to be contemplated upon. These people are to be lived! It is only by living that one can understand such tremendous phenomena.

Chapter 9 : He Died in Samadhi

Be Still and Know