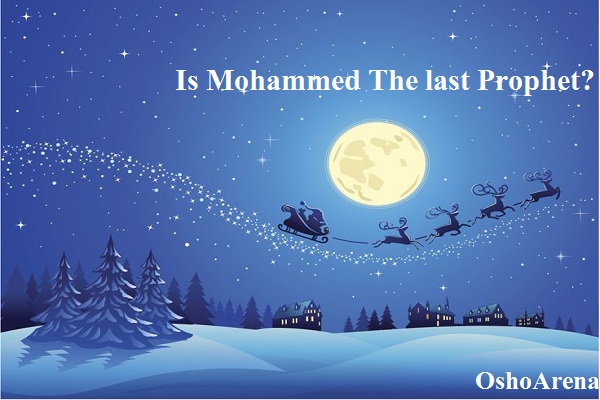 In Baghdad it happened

A man declared, in the days of Calipha Omar, “I am the real prophet. After Mohammed I have been sent to the world.” Of course, Mohammedans cannot tolerate such a thing – at least not Mohammedans. If he had been in India he would have been tolerated, but Omar could not tolerate it. He was thrown in the jail.

But after seven or eight days another man declared that he was God Himself. Now this was going too far. That man was thrown into jail.

After a few days Omar went to the jail to see them because both were beaten badly, punished badly. He thought, “Now they may have come to their senses.” He went and he asked the man who was declaring himself the new prophet – and he was laughing! His whole body was covered with wounds, blood was flowing out of the wounds, but he was laughing loudly. Omar said, “Why are you laughing?”

He said, “When God told me, ‘You are going to be my last prophet, the final prophet,’ He told me also that ‘They will treat you badly — they always treat prophets very badly.’ And now the prediction has come true. So I am laughing – it simply proves that I am the prophet!”

While this dialogue was going on, the other man who was tied to another pillar, started laughing even more loudly. Omar asked, “What is the matter with you ?”

He said, “This man is a liar. I never sent him. In fact, after Mohammed I have not appointed any prophet to the world.

Mohammed is my last prophet!”

You can find many people in madhouses, and the psychoanalysts’ understanding depends on them. And when Jesus declares that “I am God’s only Son, the only begotten Son!” of course he is mad. Certainly! – because there are mad people who declare such things. He is also mad.

The Discipline Of Transcendence Vol 3

How The Professionals Work