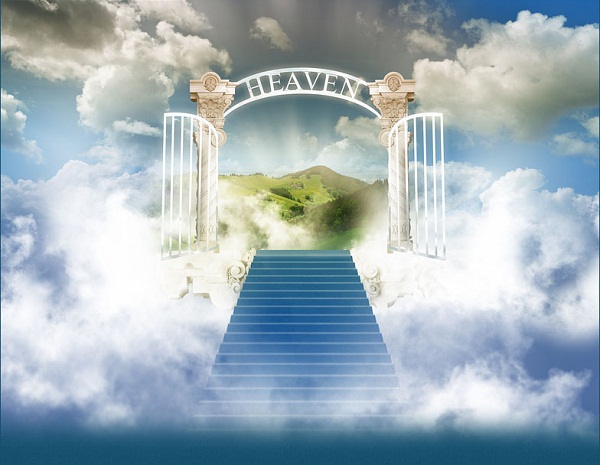 Bertrand Russell has a beautiful story…..

A Christian priest had a dream that he had died, and of course reached heaven. But he was very shocked because the doors of heaven were so big that he could not see where they ended. In all directions, as far as he could see, there was the door. And he himself, compared to the door, looked like an ant. He was very shocked: ”This is very disrespectful. I was hoping that God would be here at the gate, and angels would be playing on their harps, ‘Allelujah!’”

The gate was closed. He knocked, but he himself wondered, ”Who is going to hear?” The gate was so vast; his knock was such a small sound, almost inaudible. It took him three days continuously knocking.

Then Saint Peter opened a window and looked down. He had one thousand eyes. The priest immediately fell on his knees, and said, ”God.”

The priest said, ”This is unbelievable. What about Jesus Christ?”

Saint Peter said, ”I have not found him either, the place is so big. I have been searching for two thousand years. And who are you?”

He said, ”I am a Christian priest from the earth.”

The priest said, ”My God! I have never heard about any index number. I’m coming from the solar system.”

Saint Peter said, ”Each star has its own solar system, and there are millions of solar systems. Again, you will have to give me the index number.”

It became a nightmare. There was no question of his getting a welcome. First, he had to give his identity; only then would the doors open. Saint Peter disappeared, telling him, ”I’m going to the library. Perhaps the librarian can help me.”

Waiting, and waiting, and waiting… perhaps thousands of years passed… he woke up from this nightmare, and he said, ”My God! It is better to be alive; I don’t want to go to such a heaven. I cancel all the prayers that I have made before. It is so humiliating.”

Just as mind is getting more and more baffled as it is approaching into the deeper realms of objective reality, in the same way, meditation goes on and on – new spaces go on opening up. It is never that you come to a place at which you can say, ”This is the dead end of the street.” There is no dead end of the street – neither inwards, nor outwards. Both are infinite.

Hence, the feeling coming to you that there is ”yet so much more,” is absolutely correct – and it is going to remain relevant forever! It is not that one day you will say, ”Now the journey is finished.”

There is no goal, there is only a beautiful pilgrimage. Make the most of it – outwardly and inwardly. Have all possible experiences, and move on.

Beyond The Capacity Of The Mind