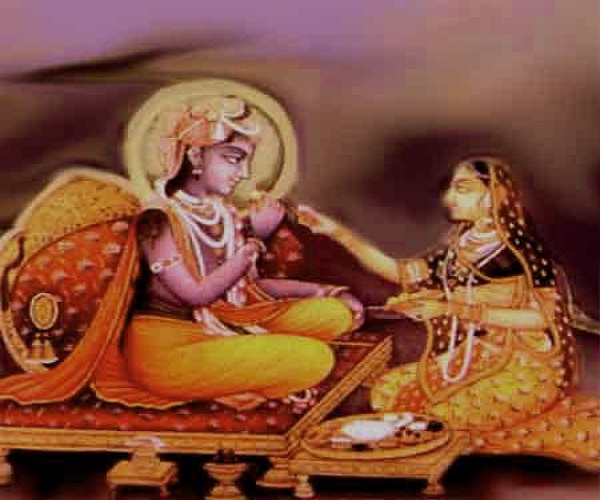 Read this beautiful story of Krishna

Once Krishna sat down for a meal. Rukmani was serving the food. Krishna had hardly taken the first morsel when all of a sudden he got up and ran out. But no sooner had he reached the door than he came back and sat down.

Rukmani couldn’t understand this behavior. She asked him, “Why did you run? for what? Then why did you come back from the door? You ran as if some house was on fire and you had to extinguish it before having your meal. But then you came back as if nothing had happened.”

Krishna replied, “Yes, certainly something was on fire, but by the time I reached the door it was extinguished, so I came back. One of my devotees was walking on a street of the capital. People were throwing stones at him, his forehead was bleeding and he was calling, “Govinda, Govinda!” He was neither reacting nor trying to save himself. He had trusted himself to me entirely. So to save him I had to run.”

When one becomes helpless like that man, existence has to take care of him. When a person becomes so empty that in spite of being stoned he is doing nothing to save himself, he is not even running away and not even reacting, then the whole existence comes to save him. When there is a pit, water rushes from all sides to fill it up. Rukmani asked, “Then why did you come back?”

Krishna replied, “By the time I reached the door, he had changed his mind. He had picked up a stone in his hand. He himself was reacting so I was not needed anymore.”

God is needed when you are helpless, and in that helpless condition when “Govinda, Govinda!” is uttered by you, then that is bhajan, devotion. There is no need to say the word Govinda aloud; the inner emotion is enough. When your eyes full of love look towards the sky, when your heart is opened towards the sky and you’re making no effort to do anything from your side, that is the moment when the divine rushes towards you. If you become a pit, he is always ready to fill it up.

The Great Transcendence
ALWAYS SING THE SONG OF THE DIVINE
Osho